Although The Cordova Inn kindly provided us with a media rate for our guest room, the opinions in this post are completely my own and based on my experience. 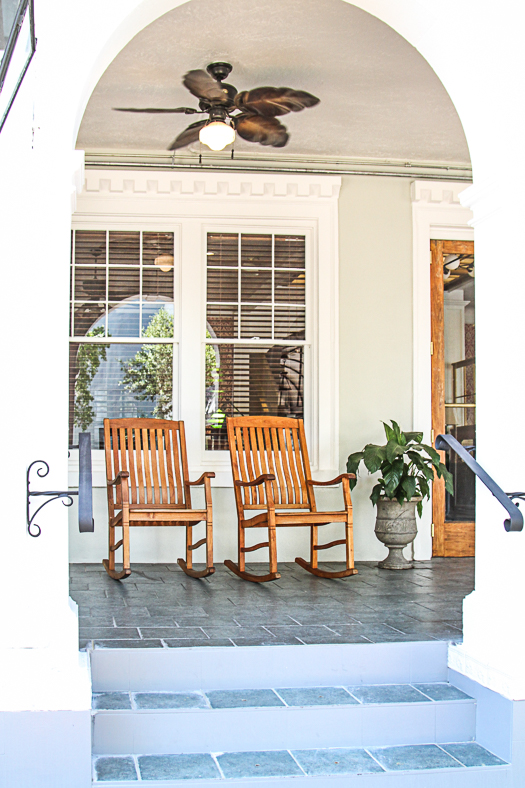 St. Petersburg is worlds different today than it was during my late-1990s jaunts from Safety Harbor to attend punk rock shows at The State Theatre. Once vacant storefronts have been muraled and are now bustling with business. Tower cranes have a presence in the relatively mid-rise town, indicating the already wonderful evolution is still in motion. And many of the town’s historic buildings have received thought-filled facelifts. 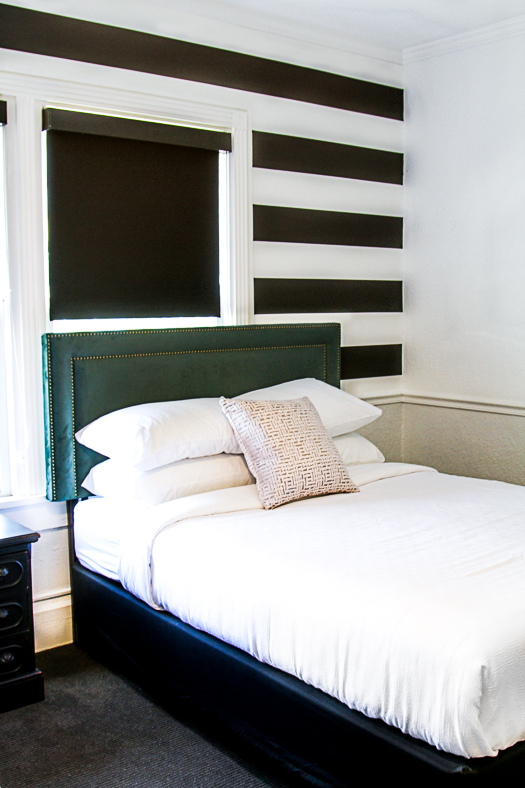 When I was scouring the internet for places to spend our two nights in the Berg, my search criteria was focused primarily on character and walkability. The Cordova Inn, located at 2nd Ave N, blocks away from Central Ave, was my first choice. 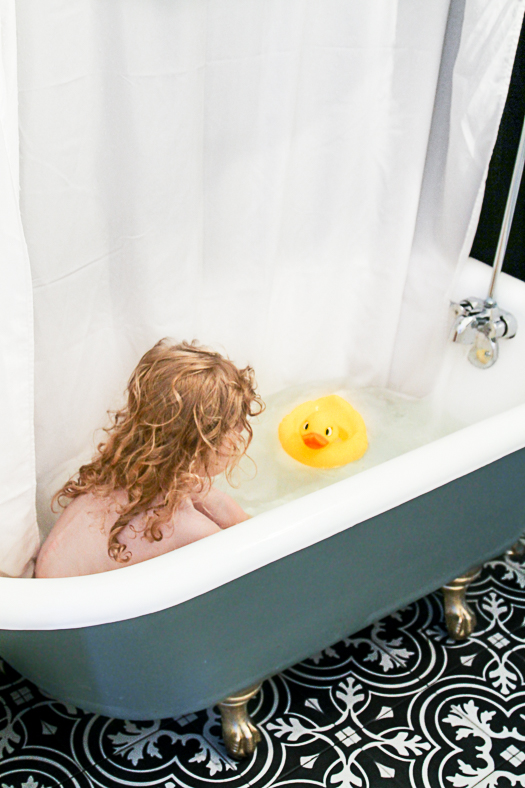 Hosting guests since 1921, The Cordova Inn is the longest operating hotel in St. Petersburg. The current ownership has transformed a once run-down building into a beautifully restored space for people with a desire to be immersed in St. Petersburg culture. While staying at The Cordova Inn, we were able to walk to every meal, passing by the Williams Park Market, Jannus Landing, and dozens of yachts floating in the Bay. 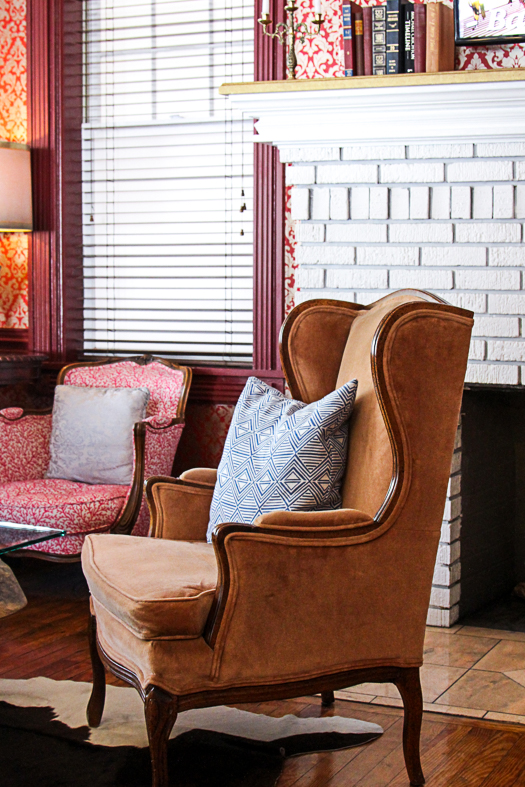 And at this hotel, more than any I can recall, we spent a significant amount of time in the common areas. Perhaps my favorite detail about The Cordova Inn is their partnership with neighbor, Locale Market, to provide complimentary charcuterie and wine during their weekend Social Hours. This time allowed us time to get acquainted with the hotel staff and other guests, making the lobby a welcoming spot to hang out. 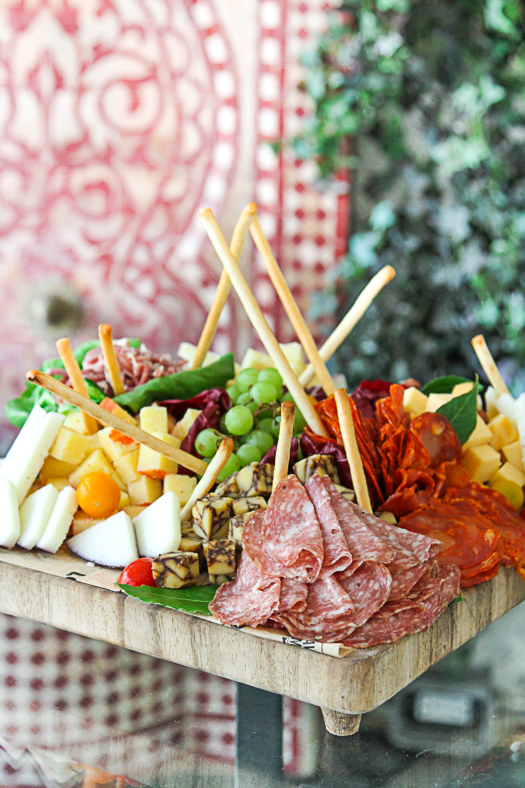 The charcuterie board was out of this world delicious {and beautiful}. After enjoying the selection of meat and cheese on Friday afternoon, we spent much of Saturday looking forward to the next Social Hour. It was also nice to pop down for a glass of wine to bring back to the room while we planned our next adventure. 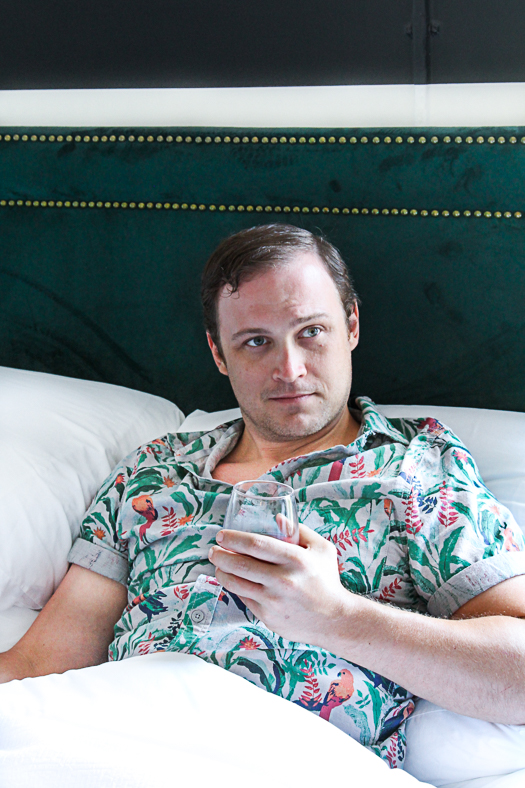 Each weekend morning, we woke up to fresh Locale Market croissants, fruit, yogurt, and coffee. What we intended on just being a morning snack was plenty to keep us full until our next meal. And let me just tell you, I’m still dreaming of the custard filled croissant! 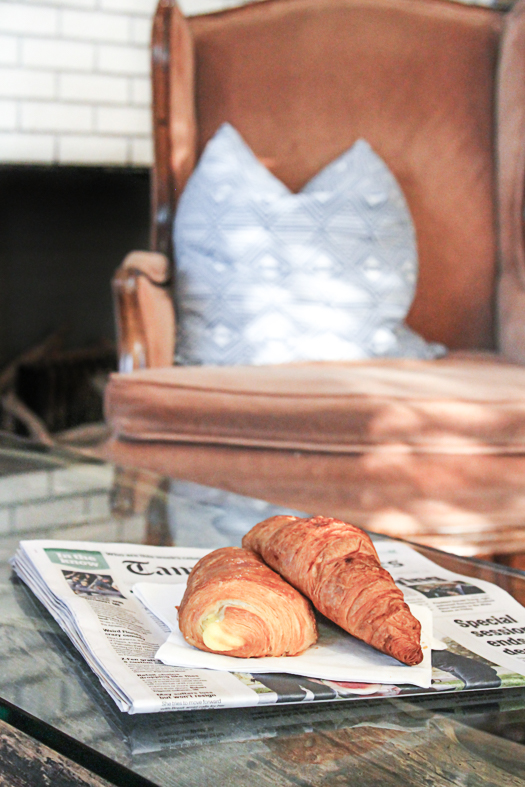 Overall, The Cordova Inn exceeded every expectation. It was truly the most wonderful place to stay as I spent the weekend introducing my boyfriend and his daughter to places and things of my childhood. Thank you, The Cordova Inn, for your hospitality – we hope our paths cross again soon!

Although The Cordova Inn kindly provided us with a media rate for our guest room, the opinions in this post are completely my own and based on my experience.

My kitchen is completely packed.  I’m groceryless, dishless, panless, and, embarrassingly, fresh outfitless.  When I had the first hunch that my final days would be filled with so many “lesses”, I knew it was time for FoodFash’s first guest post.  Immediately, my childhood friend with whom I’ve reconnected with consistently over the years, Agie, came to mind.  I hope you enjoy her creativity and enthusiasm as much as I have since our first days as friends in freshman year photography class, a mere 15 years ago.  Thank you Agie!!!

Ages ago,  a post on Stumbleupon caught my eye, in which famous chefs created dishes based on a piece of art.  So, I opted to blatantly  adapt this idea to feature the places and pieces of art that I dig in the local Tampa Bay area to create recipes that feature ingredients obtained from the Saturday Morning Market or from local purveyors.

So on my inaugural post, it is fitting that it is inspired by Dali! Love that savvy follicular gent. Saw the documentary “The Dalí Dimension” at the museum in which people far smarter than myself talked about his fascination with the sciences and how it affected his work. I was struck by the notion that experts thought his melting clocks in La persistència de la memòria (1931) were reflective of his take on the theory of relativity and he demurred that in fact they simply reminded him of a wheel of cheese melting in the midday sun. Funny, as it always looked like fried eggs to me. So ran with a combination of both and opted to make a Brie egg sandwich, of sorts.

The Saturday Morning Market in Downtown St Petersburg is pretty much my sole provider of produce, and it’s pretty safe to say that if you ever visit, you will dig it as well. From empanadas to organic produce to live music to a sausage wrapped in bacon wrapped in steak (woah),  it has a little bit of everything and colorful people watching as well.  Colorful people tend to be the only kind that I am interested in being around, and judging by the scene from the documentary in which Dali essentially just messed with his dinners guests (Bob Hope’s reactions in particular were amusing) I thought that an egg and brie sandwich would be lacking a bit of visual punch. So I then remembered another one of his famous pieces: The Hallucinogenic Toreador (1968–1970) and that there is a bit of painting (lower third left portion) in which molecules look a bit like confetti.

So, naturally,  I opted to make a tipsy pepper confetti relish to add some joie de vivre to the dish. Used an apple corer to cut out perfectly symmetrical peppers and red onion. Yes. Fully aware that I toe the line of ridiculity when it comes to the photogenic nature of food I consume. Just like to eat with my eyes, as well.

Saute veggies, olive oil, and salt/pepper over medium heat until the veggies are softened.  Reduce the heat to low and add 1/2 cup red wine vinegar, sugar, and Jack Daniel’s honey to the veggies.  Allow the mixture to simmer until the majority of the liquid has evaporated (approximately 15 minutes).  Remove the pan from heat and stir in the remaining 1-1/2 teaspoons of red wine vinegar.  Allow to cool for about one hour.

Throw some cheese on a thinly sliced fresh loaf of bread, broil it for a bit to get the bread crispy and cheese gooey.  Add egg, Tipsy Pepper Relish, and sriracha, and that should tickle your fancy.  Enjoy!

*Note: The bread was a freshly baked garlic ciabatta loaf, eggs from The Dancing Goat (overheard her that day, say: “I never had a dog or cat growing up, this is a mid-life crisis gone awry.”), and all spices from VSpicery.  For my veggie pals, check out their Applewood Smoked Sea Salt. It adds that aroma we all associate with deliciousness. So yum.

Playing with  food is always recommended. The remnants of this red onion looked somewhat similar to the light shining through the glasswork of the Dali museum, no?

Thanks so much for reading!  And as every cook sesh requires a soundtrack, check out my favorite DJ, not only does she rock a set like a headliner as an opener, but loves picklebacks as well.  My kind of laska! 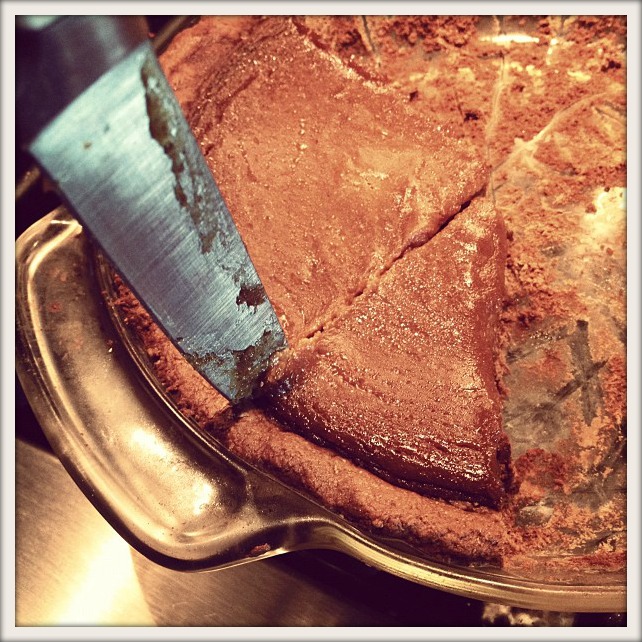 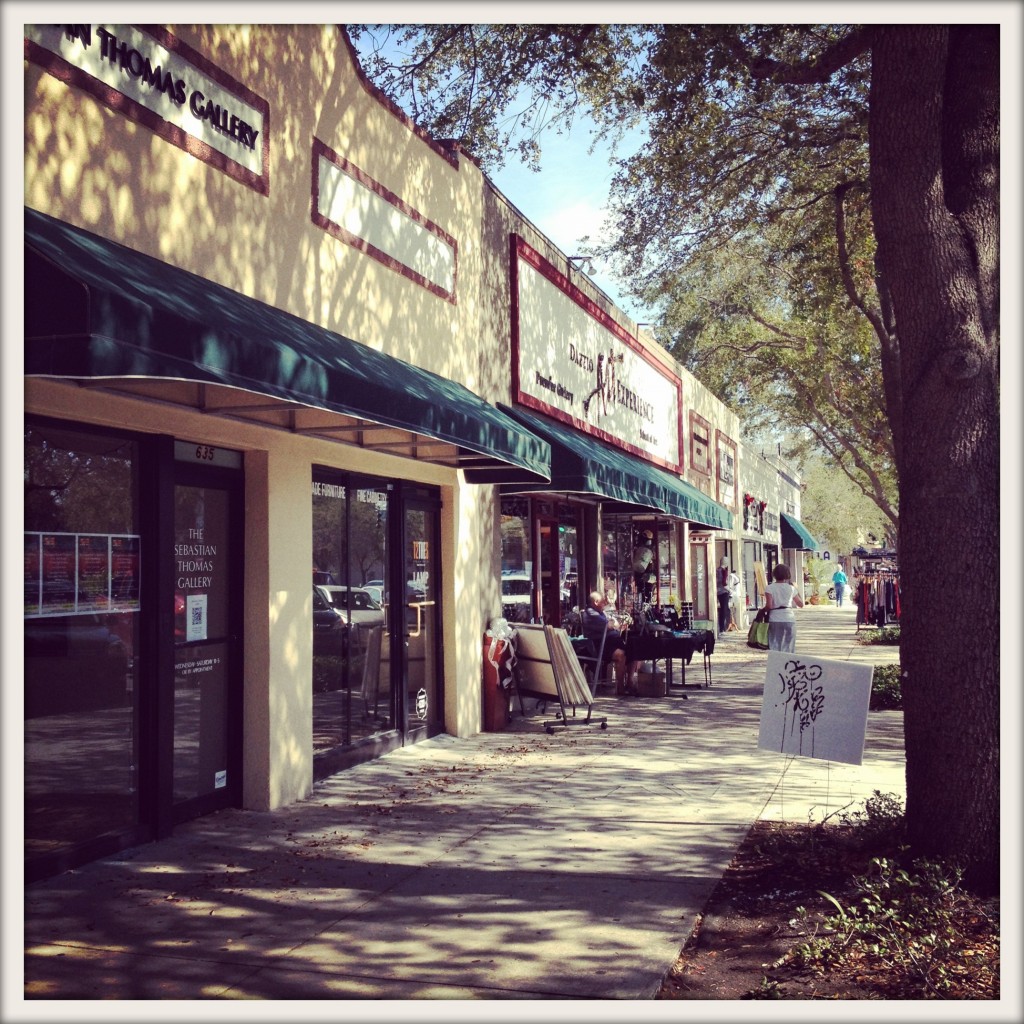 I snacked on pie and took my time getting ready.  It’s been a while since I’ve had a day off of work without traveling involved.  And I had no particular reason for taking the day off other than I was at a breaking point, both literally and figuratively, with my project and it seemed like the logical thing to do. 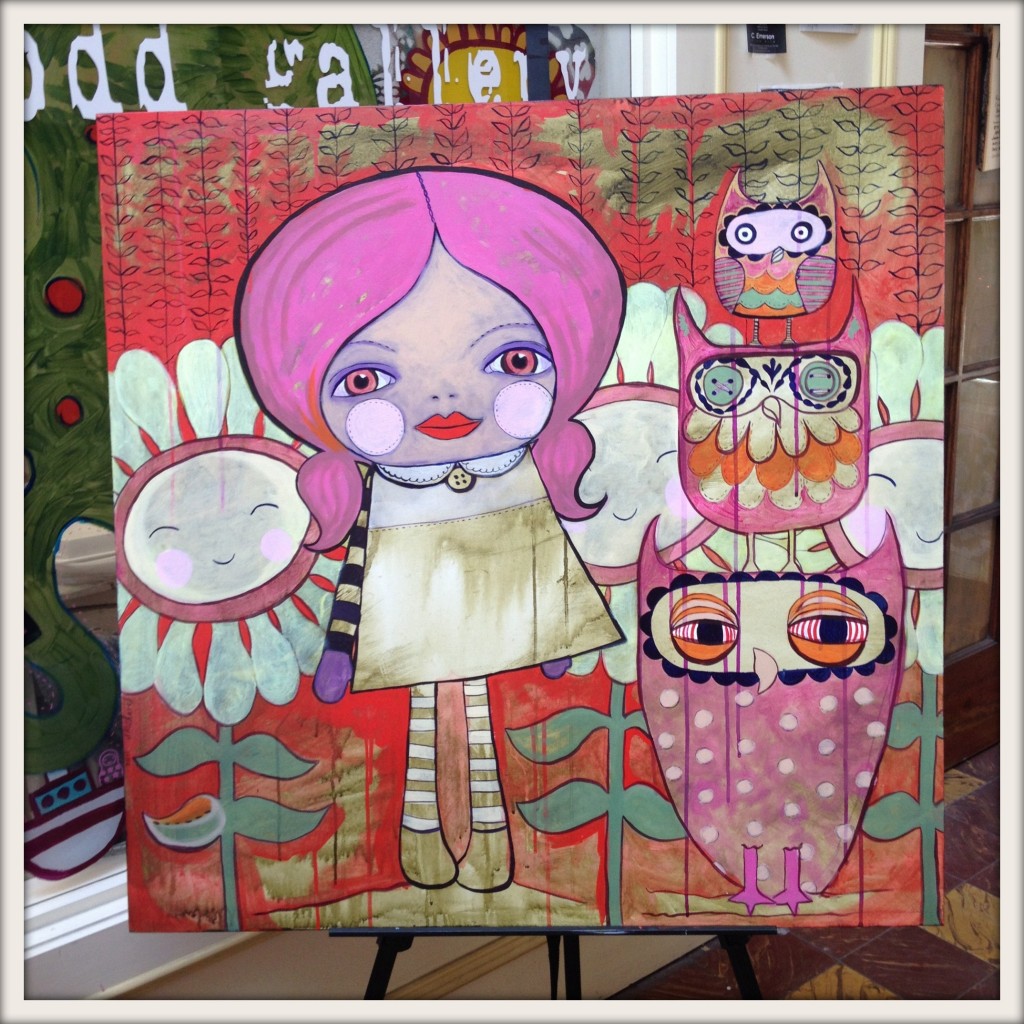 I ran some errands and then headed over the bridge to meet my mom in downtown St. Pete.  Whenever I go to the State Theatre for a show, there are a slew of stores that I make a mental note of visiting if I’m ever in the area during small store business hours.  Today was my day to do just that. 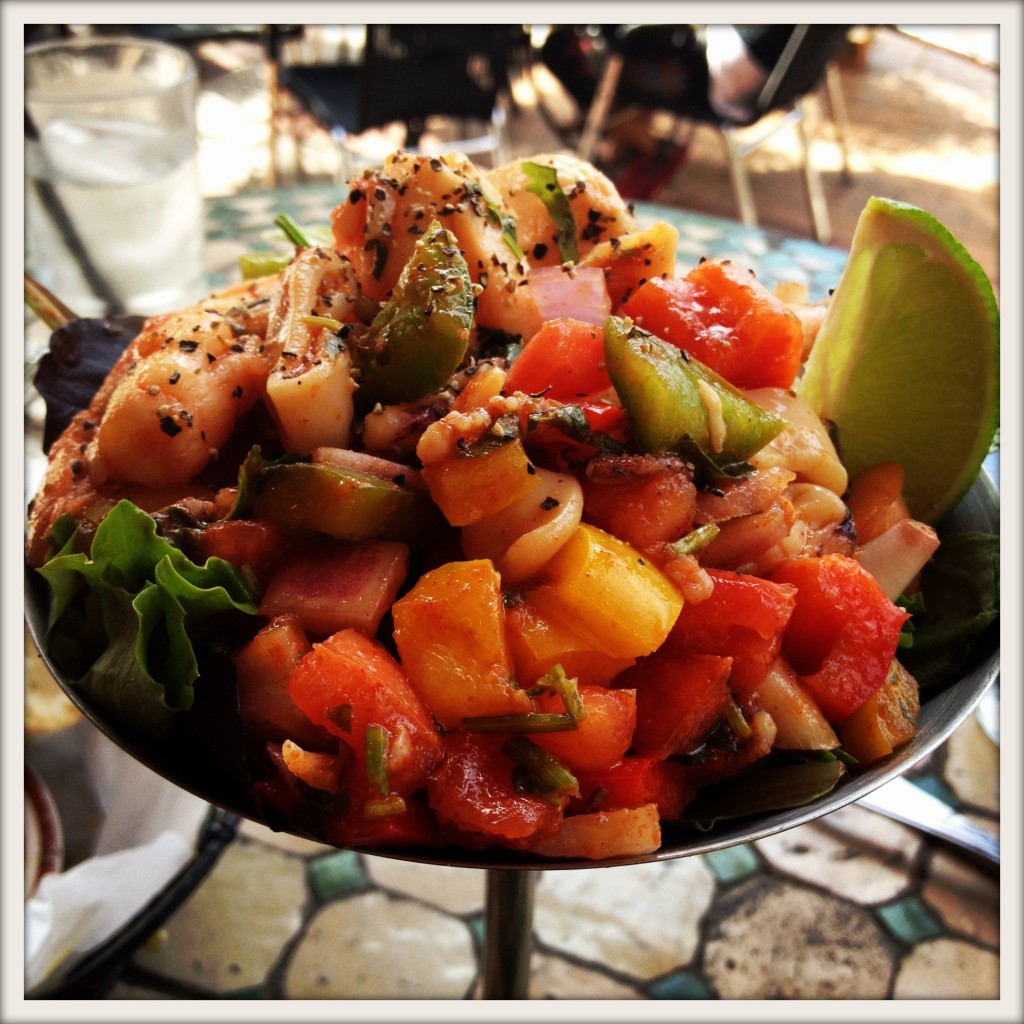 Unfortunately for me, but fortunately for my wallet, I didn’t find any fashion gems.  But since I wasn’t looking for anything in particular, I had a fine time rummaging through potential treasure and chatting it up with my mom. 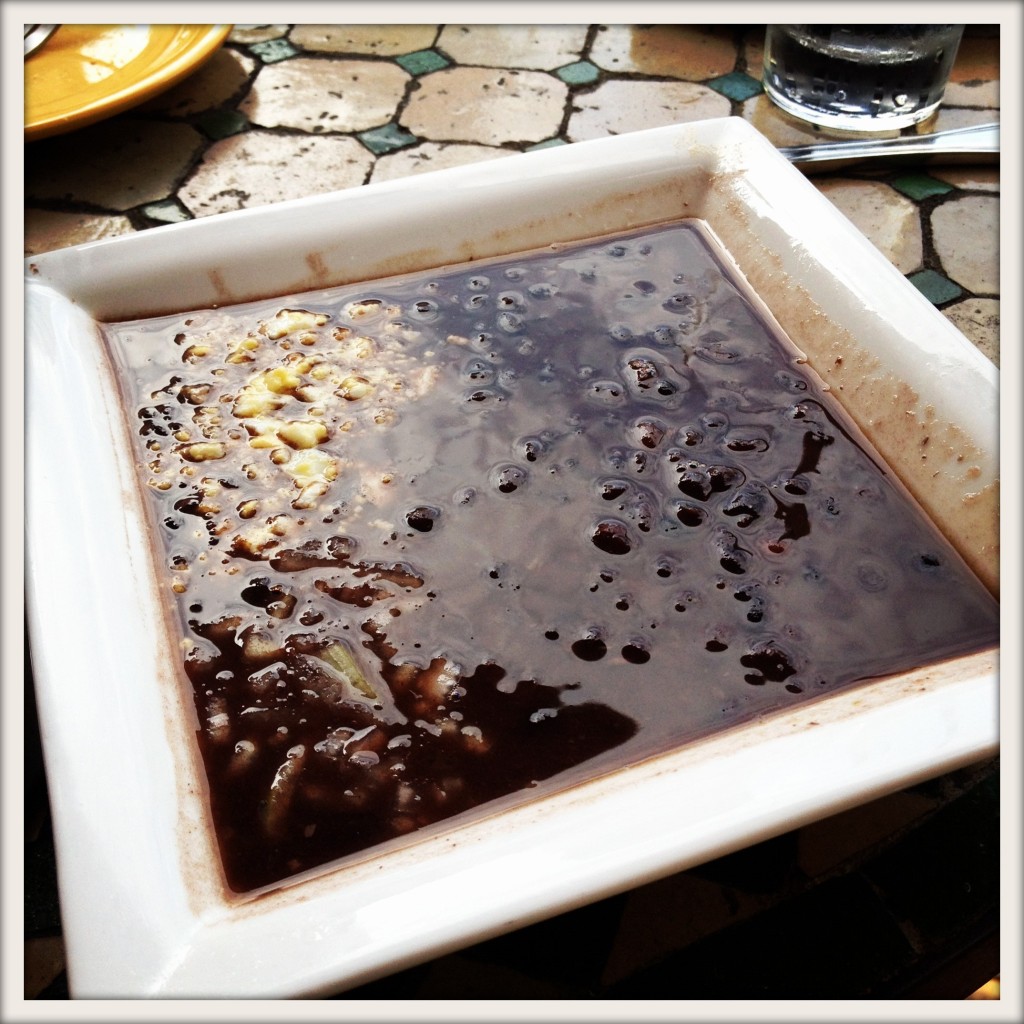 Afterward we headed to Ceviche for an outdoorsy lunch.  I still maintain that Ceviche’s ceviche is top notch goodness. 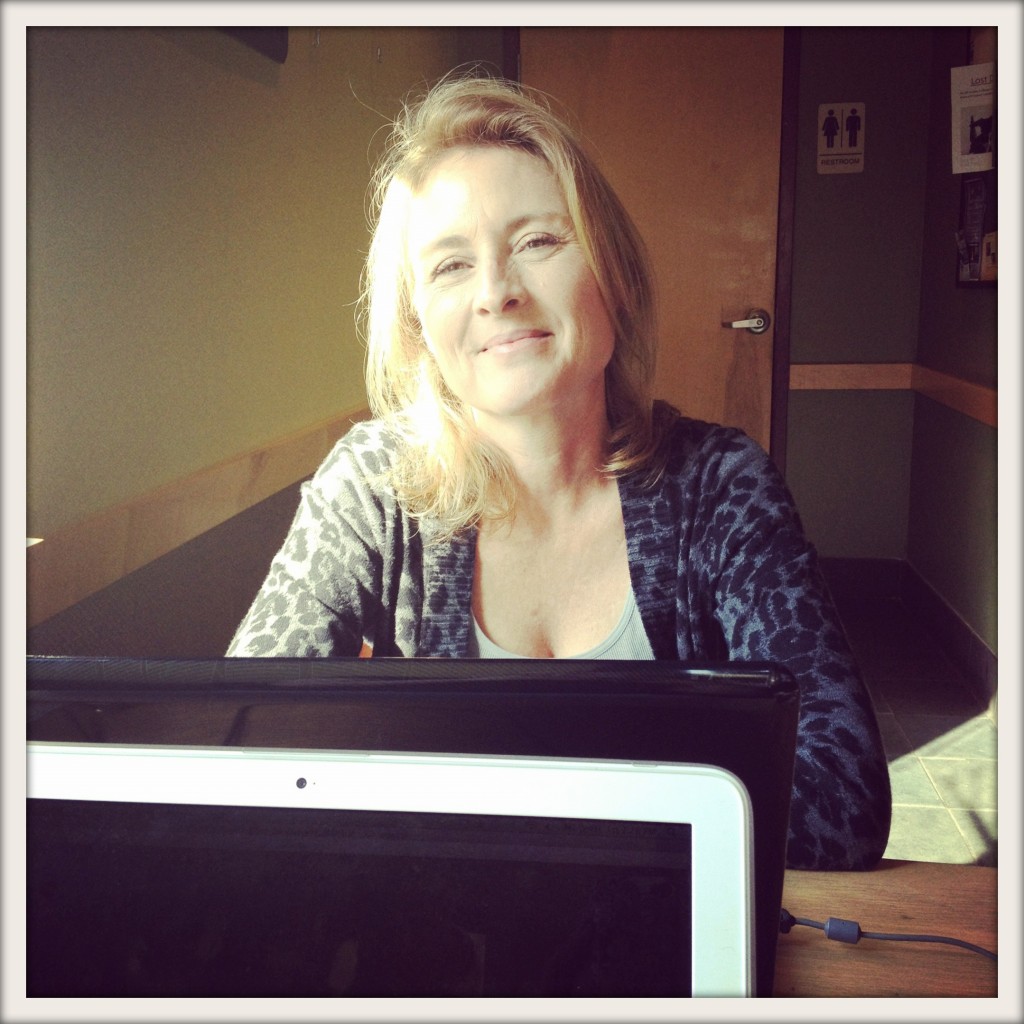 Now we’re sitting across from each other at Starbucks, sipping on warmth and typing away on our respective laptops.  What a lovely day!!

“These Old Days” from the Dr. Dog album Fate