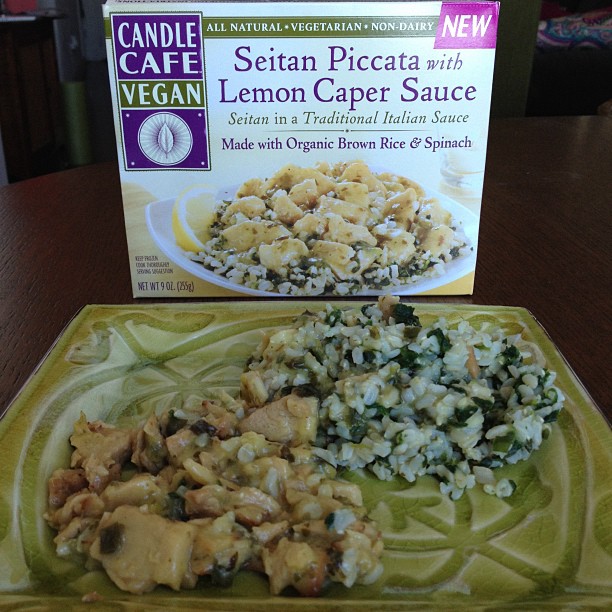 When I was at Whole Foods earlier this week, I stocked up on a couple emergency frozen meals.  Ordinarily, I buy the same Amy’s Organic Mexican meals every time.  But during this stroll down the frozen aisle, I noticed a heavily discounted new brand and decided to give it a shot.  I’m glad I did!

While microwaving, I made the connection between Candle Cafe Vegan and Candle 79.  I was so pumped because it brought back memories of when my friend Cesa and I dined at Candle 79 when I visited her in NYC in 2009.  The frozen meal was obviously no match to the amazeballs Candle 79 experience, but it was a nice change-up from my ordinary.  The macaroni & cheese and tofu spinach ravioli were out of stock, but I’ll be keeping an eye out for them during my next trip to the market. 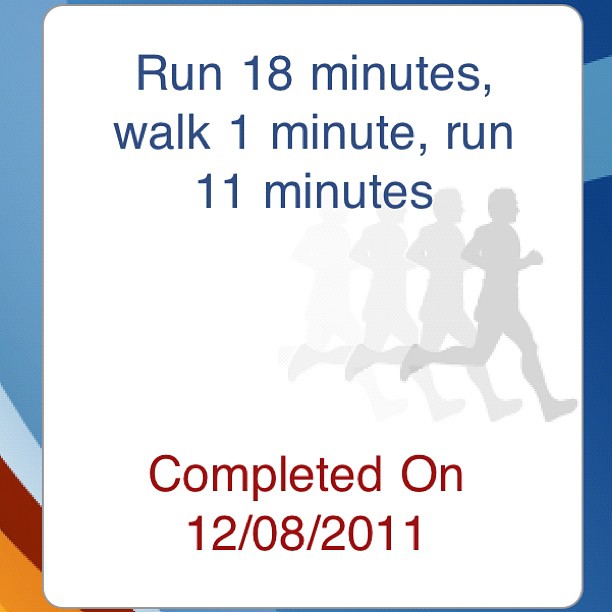 On a side note, I finished Week 6, Day 3 of the Personal Running Trainer app! I’m still amazed at how well this program has enabled me to go from only being able to run a few minutes at a time to running for almost 30 minutes straight! 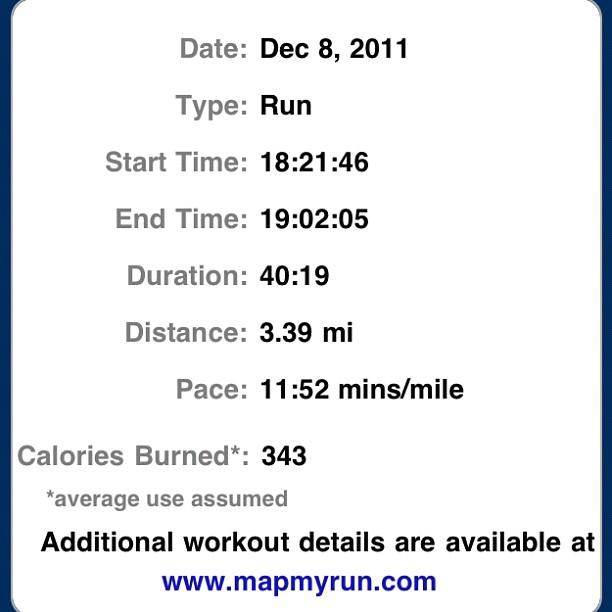 Even though 11 of the 40 minutes were a brisk walk (5 minute warm-up and 5 minute cool-down), I still have a lot of work to do in the speed department.   I’m hoping that yoga and barre fitness classes will help me build muscle and, in turn, make me a fast(er) runner.

Do you have any tips for increasing your running speed? 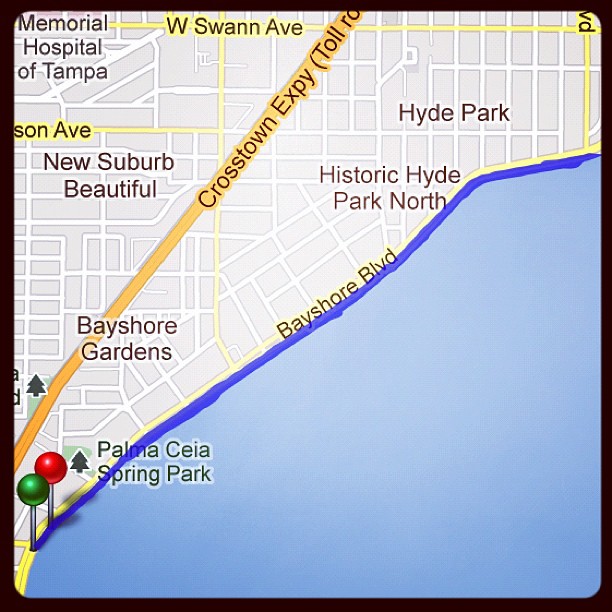 It turns out that running a 5k smack dab in the middle of 5k training is highly motivational! I did not want to run tonight one bit. My new phone (4S!) arrived at work late in the day, and to be quite honest, all I wanted to do was go home and get it all set up. 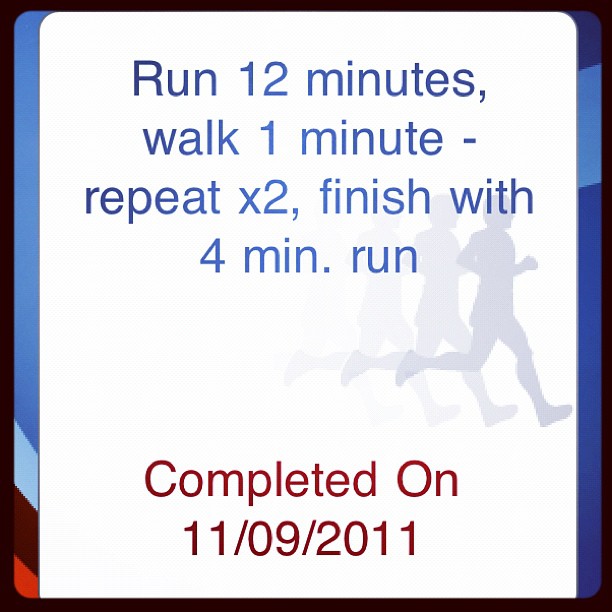 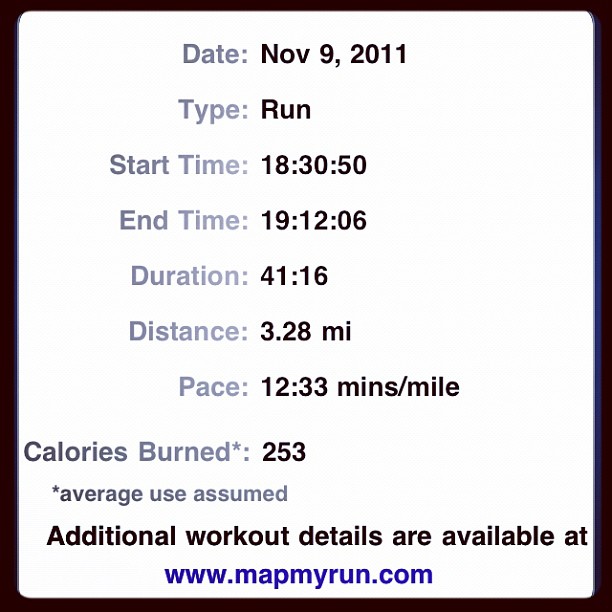 I definitely felt faster today than I have to date and I attribute that largely to the Personal Running Trainer app. Every single time I feel intimidated by a new level, I finish to the tee. It’s almost like the app knows my body better than I do. Hmm… 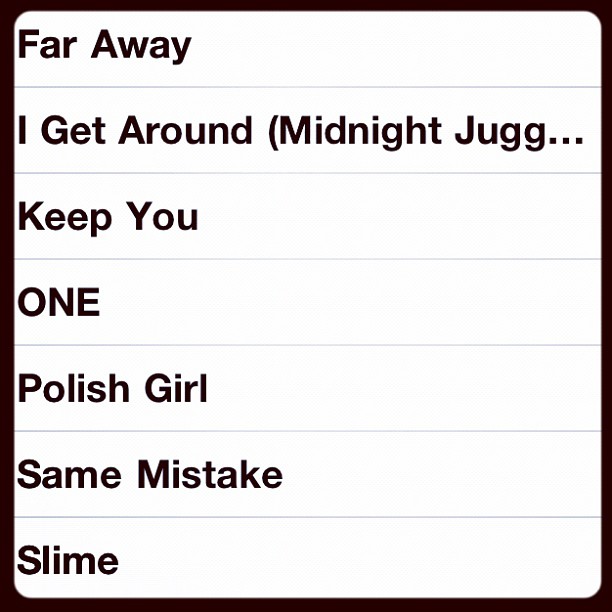 I also haven’t had time to create any new playlists, so I’ve been alternating between the 7 I had created before DC and LA took over my life. Tonight I made a good choice with Week 1, Day 2, but I need some new stuff stat! I’ve started to memorize the lengths of each song and do weird lyric countdowns to predict when I’ll be finished (annoying!). 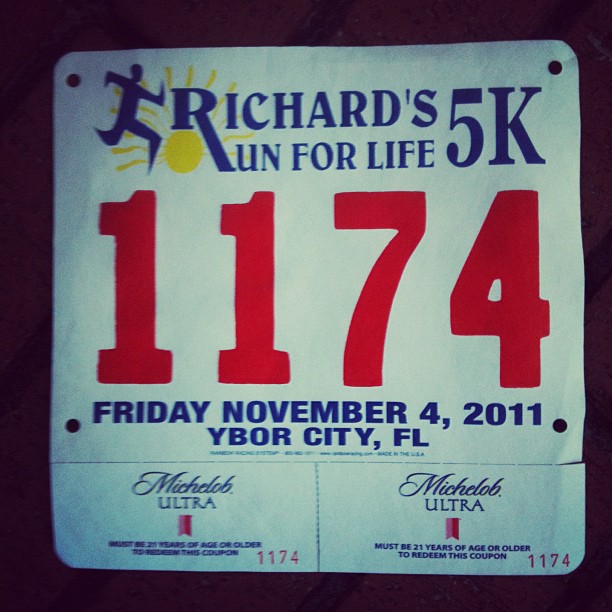 A few weeks ago, I searched for a night-time run and found that the Richard’s Run for Life 5k was about to take place.  Val and I signed up even though we knew we wouldn’t have much time to continue with our run training apps before the 4th. 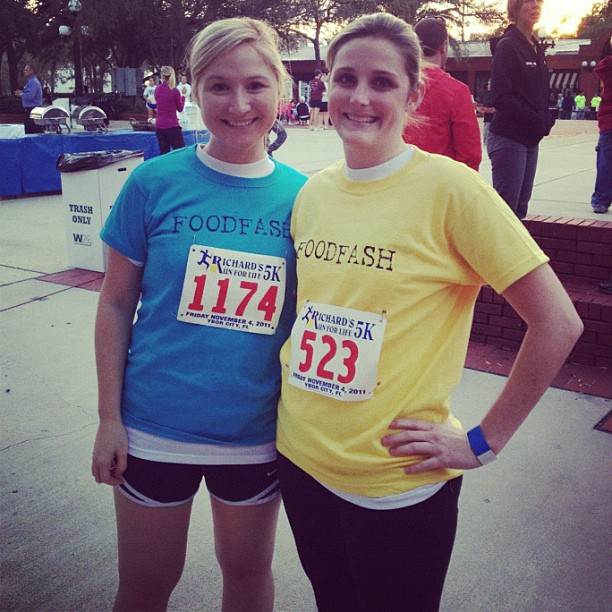 Being the best and most supportive friend ever, Val suggested we order FoodFash shirts, as long as they were bright colors.  I whooped up a couple on Spreadshirt before heading to LA and, thankfully, they arrived two days before the race.

We planned a meeting spot in case we separated by the end of the run, but just before mile two we found each other and ran together the rest of the way.  We only walked for three short intervals (a minute or less) – which was impressive to both of us since the last time either of us ran was earlier in October. 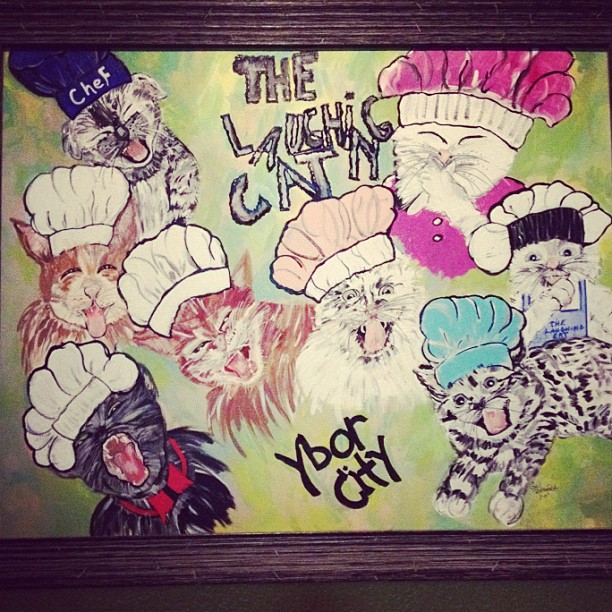 Even though there was plenty of food after the race, the lines were entirely too long for our hunger level.  We walked over to one of our favorites, The Laughing Cat, to reward our bellies with carb loaded Italian. 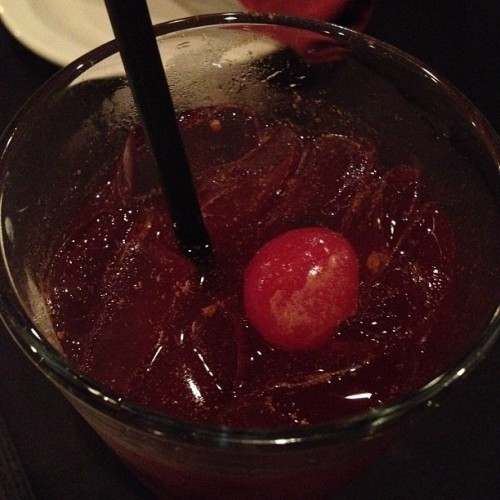 Oh, and a pitcher of sangria! 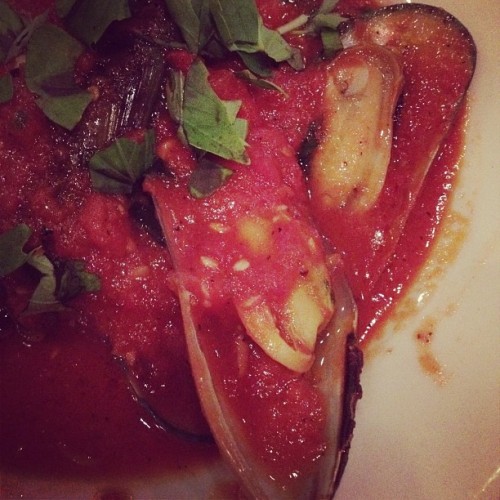 I ordered the mussels.  They were soaked in the best marinara in town and topped with the freshest of basil.  Even though these mussels were mammoth in size (typically not my style), the flavor and texture were similar to smaller mussels, so I didn’t mind. 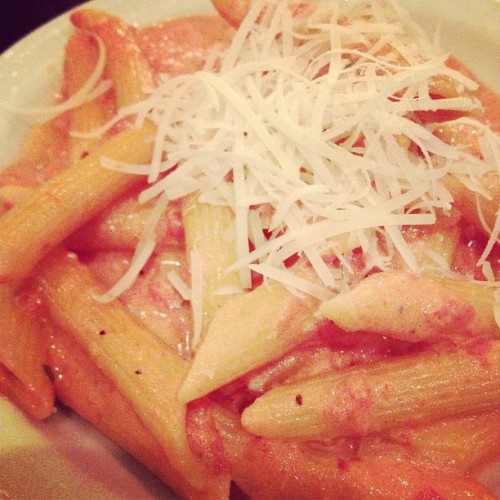 I probably would have been fine with bread and mussels, but I am still partially off the non-dairy wagon and wanted to indulge in pasta from my favorite Italian joint.  So glad I did!

We most definitely celebrated burning 300 calories by consuming 1000, but it made for a super fun Friday night!

What do you like to eat after a race?

It’s a pretty accurate statement to say that if I haven’t been blogging, I haven’t been working out either.  After days of being a busy bee, I woke up with plans for both today.  But when I woke up to stormy weather, my motivation was as distant as the sunshine.

I felt stereotypically, stormy weather lazy until around 5 PM when I came to terms with how disappointed I’d be tomorrow if I spent the entire day lounging. I ate an apple with peanut butter while my headphones charged and then headed to Bayshore Blvd.

I was nervous about picking up where I had left off in my running app since it had been almost two weeks since my last run, but it ended up being one of the best runs yet.  Low 70’s, overcast, and breezy might just be my favorite running weather!

I stopped at Whole Foods on the way home to pick up kale and lemons to make Brittany’s version of Whole Foods’ garlicky kale.  Even though I’ll be in DC this week eating an abundance of garlicky kale, I wanted some QT with my kitchen and this recipe was the only thing on my mind.

I’ll be staying in Alexandria, VA until Wednesday if you have any restaurant suggestions!