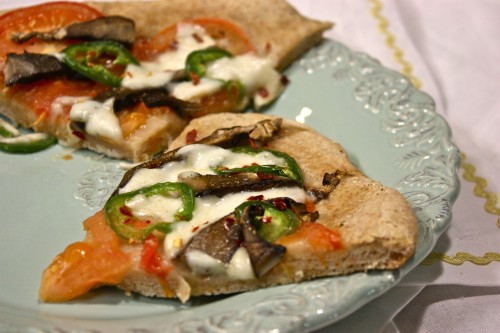 There were two things that got me through tonight’s workout at H.E.A.T. Bootcamp:

1.  Meeting Andrea.  When Katie found out I was moving to Austin, she introduced me to Andrea, who had recently moved from Atlanta to Austin, via Facebook.  We’ve been chatting up a storm over the past few months and it was great to finally meet her!

2.  The pre-prepped batch of pizza dough that was waiting for me to cover it with a bunch of goodness when I got home. 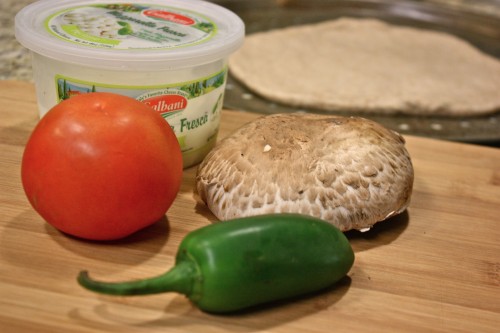 I’ve been on this crushed red pepper/sriracha/spicy kick for the past few months, so I couldn’t help but purchase this gynorm jalapeno at the market over the weekend.  I was a tad nervous that fresh japs would be too intense, so I sliced them on the thin side.  It was a good move. 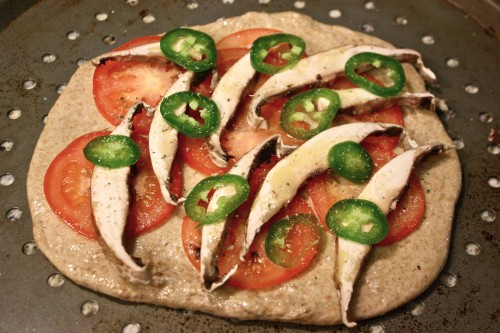 As far as the rest of the toppings go, I brushed the dough with olive oil, topped with sliced tomatoes, portobellos, and the thinly sliced jalapenos.  I brushed everything with olive oil again to ensure nothing turned dry or crispy and baked in a 425 degree oven for 8 minutes. 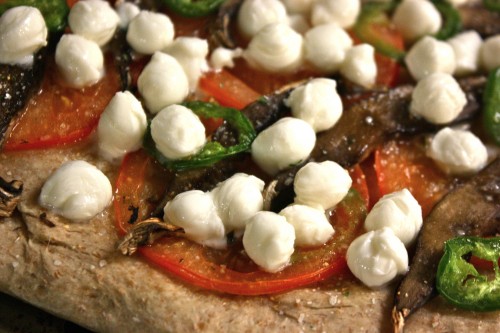 When the veggies were looking good and wilted, I added fresh mozzarella pearls and baked for another 5-ish minutes until the cheese was melted.  I am a huge fan of cooking with fresh mozzarella, but it tends to release a TON of water when it cooks.  I remedied the soggy situation with a paper towel after baking, but I’m wondering if I should squeeze some of the excess moisture out of the cheese prior to baking next time.

And even though my go-to pizza toppings for the past decade have been spinach and artichokes, I’ll happily push those aside for mushrooms and jalapenos.  Spicy umami is where it’s at!

Although I dabble in bringing non gluten-free groceries home, I really try not to.  Sprouted wheat goods are my justified compromise for breads.  And it’s not a true compromise, as I secretly prefer their frozen freshness over what can be found on the preservative packed aisles.  The one exception to this is a sprouted wheat tortilla – yuck!  After a one-time tasting, I was forced to say “buh-bye bean and cheese quesadillas!”.