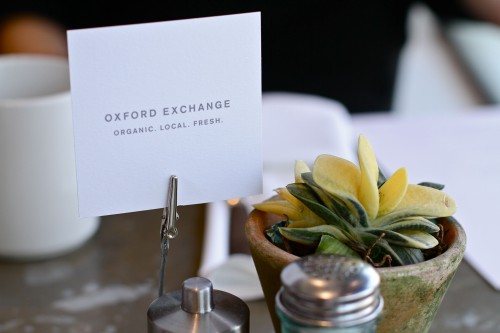 As soon as Thanksgiving fullness wore off, Val and I started scheming about weekend brunch plans.  She suggested Oxford Exchange, the newest of her favorite places in Tampa town.  She described the concept and I was sold. 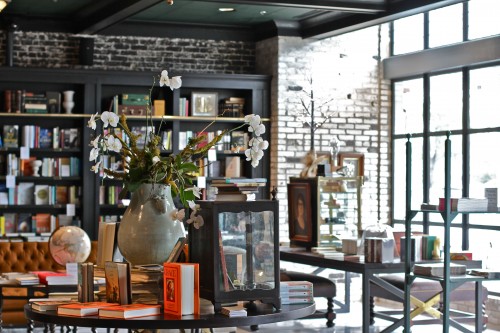 I woke up this morning beyond excited for brunch, appropriately humming Oxford Comma. 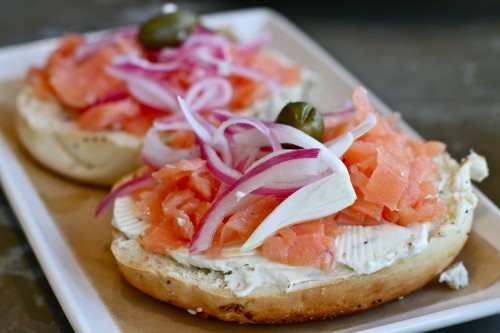 We sat in the main dining room, which was the perfect combo of light, airy, crisp, and cozy.  Every detail, from the wall tile to the ceiling panels to the light fixtures…  amazing.  Architecturally speaking, Oxford Exchange might just be the best restaurant thing Tampa has going on right now.

After I finished ooohing and ahhhing, I read through the varied, yet simple, menu.  My biggest brunch peeve is when a major breakfast component is forgotten.  That was certainly not the case with this menu.  Eggs, pancakes, oatmeal, lox, all covered.  We went with smoked salmon bagel and fresh berry pancakes and couldn’t have been more pleased.  The goodness and proportions were as equally thought out as the ambiance.

And when we finished up, the server brought us the check with a quote of the day.  It was the brunch equivalent of a fortune cookie, but cuter.

My kitchen is completely packed.  I’m groceryless, dishless, panless, and, embarrassingly, fresh outfitless.  When I had the first hunch that my final days would be filled with so many “lesses”, I knew it was time for FoodFash’s first guest post.  Immediately, my childhood friend with whom I’ve reconnected with consistently over the years, Agie, came to mind.  I hope you enjoy her creativity and enthusiasm as much as I have since our first days as friends in freshman year photography class, a mere 15 years ago.  Thank you Agie!!!

Ages ago,  a post on Stumbleupon caught my eye, in which famous chefs created dishes based on a piece of art.  So, I opted to blatantly  adapt this idea to feature the places and pieces of art that I dig in the local Tampa Bay area to create recipes that feature ingredients obtained from the Saturday Morning Market or from local purveyors.

So on my inaugural post, it is fitting that it is inspired by Dali! Love that savvy follicular gent. Saw the documentary “The Dalí Dimension” at the museum in which people far smarter than myself talked about his fascination with the sciences and how it affected his work. I was struck by the notion that experts thought his melting clocks in La persistència de la memòria (1931) were reflective of his take on the theory of relativity and he demurred that in fact they simply reminded him of a wheel of cheese melting in the midday sun. Funny, as it always looked like fried eggs to me. So ran with a combination of both and opted to make a Brie egg sandwich, of sorts.

The Saturday Morning Market in Downtown St Petersburg is pretty much my sole provider of produce, and it’s pretty safe to say that if you ever visit, you will dig it as well. From empanadas to organic produce to live music to a sausage wrapped in bacon wrapped in steak (woah),  it has a little bit of everything and colorful people watching as well.  Colorful people tend to be the only kind that I am interested in being around, and judging by the scene from the documentary in which Dali essentially just messed with his dinners guests (Bob Hope’s reactions in particular were amusing) I thought that an egg and brie sandwich would be lacking a bit of visual punch. So I then remembered another one of his famous pieces: The Hallucinogenic Toreador (1968–1970) and that there is a bit of painting (lower third left portion) in which molecules look a bit like confetti.

So, naturally,  I opted to make a tipsy pepper confetti relish to add some joie de vivre to the dish. Used an apple corer to cut out perfectly symmetrical peppers and red onion. Yes. Fully aware that I toe the line of ridiculity when it comes to the photogenic nature of food I consume. Just like to eat with my eyes, as well.

Saute veggies, olive oil, and salt/pepper over medium heat until the veggies are softened.  Reduce the heat to low and add 1/2 cup red wine vinegar, sugar, and Jack Daniel’s honey to the veggies.  Allow the mixture to simmer until the majority of the liquid has evaporated (approximately 15 minutes).  Remove the pan from heat and stir in the remaining 1-1/2 teaspoons of red wine vinegar.  Allow to cool for about one hour.

Throw some cheese on a thinly sliced fresh loaf of bread, broil it for a bit to get the bread crispy and cheese gooey.  Add egg, Tipsy Pepper Relish, and sriracha, and that should tickle your fancy.  Enjoy!

*Note: The bread was a freshly baked garlic ciabatta loaf, eggs from The Dancing Goat (overheard her that day, say: “I never had a dog or cat growing up, this is a mid-life crisis gone awry.”), and all spices from VSpicery.  For my veggie pals, check out their Applewood Smoked Sea Salt. It adds that aroma we all associate with deliciousness. So yum.

Playing with  food is always recommended. The remnants of this red onion looked somewhat similar to the light shining through the glasswork of the Dali museum, no?

Thanks so much for reading!  And as every cook sesh requires a soundtrack, check out my favorite DJ, not only does she rock a set like a headliner as an opener, but loves picklebacks as well.  My kind of laska! 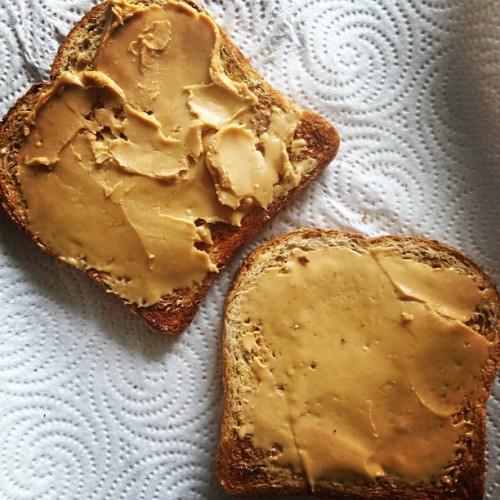 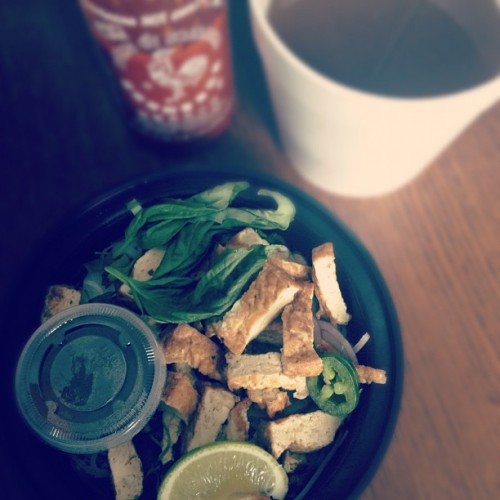 It was very apparent as I pulled the last slices of sprouted wheat bread out of the freezer this morning, toasted them, and spread them with peanut butter, that I was going to be a very hungry girl today if I didn’t order some kind of take-out.  Thankfully, Bamboozle has a $20 minimum for delivery, or else I would have never considered ordering dinner at the same time as lunch.  Because of this freakishly abnormal foresight, I was able to run a boat load of errands, get my hair highlighted one last time in Tampa (I’m going to miss Helena SO much!), and almost finish packing.  The movers are coming in the morning and I have a few random things that I wish would just pack themselves! 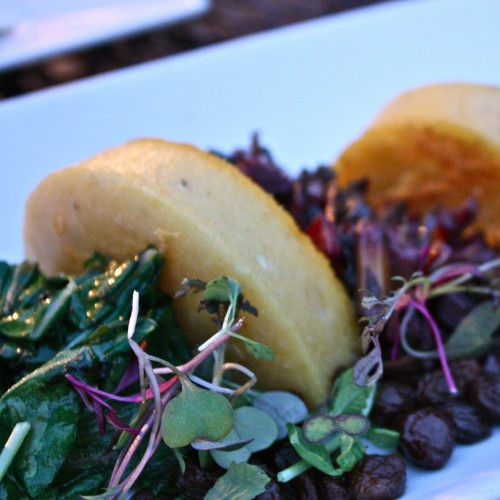 My last weekend in Tampa was one for the gluttonous books.  It started on Friday, ended on Sunday, and provided me with five pounds of extra errr love.  I am perfectly OK with tighter than usual pants.  It was completely intentional and oh so worth it.

Friday night, Lex, Lindsey, and I went to The Refinery where we split a handful of small plates and entirely too much red wine.  We cleaned our plates and headed to Fly, where we bounced back and forth between the upstairs and downstairs bars, sampling concoctions from my two favorite bartenders.  We laughed, we danced, we woke up on Saturday with upper-twenties-hangovers. 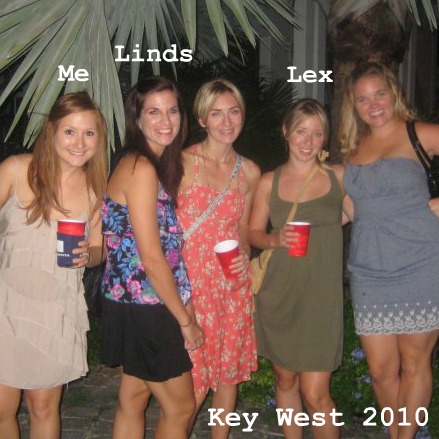 We completely failed in the picture department.  Thank goodness for Facebook… 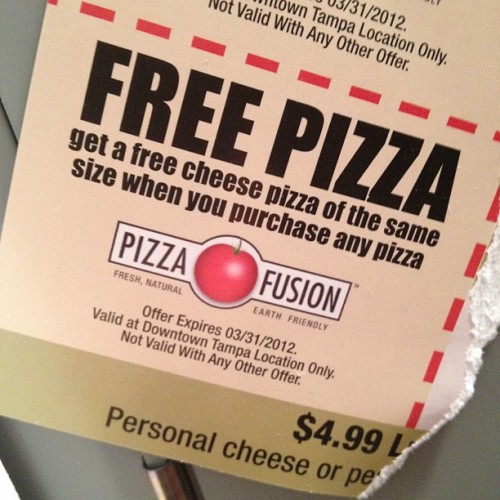 Saturday night, Val, Amber and I cashed in my coveted Pizza Fusion coupon and had a pizza/movie/brownie sundae sleepover.  I think we all agreed that we had never felt so full in our entire lives.  The feeling was worse than hoarding candy on a childhood Halloween, but we powered through it until it was time for the deepest food coma sleep EVER. 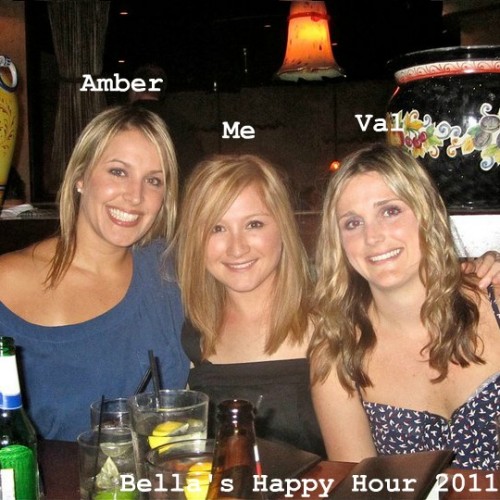 On Sunday, after two serious girls nights, it was time to meet up with the boys and the family for brunch at Gaspar’s Grotto.  We packed around a few umbrella covered picnic tables and dug into more deliciousness.  My mom and I split the eggsters rockefeller which was so much better than I would have ever imagined.  Forget Canadian bacon, I’ll take spinach and fried oysters any day. 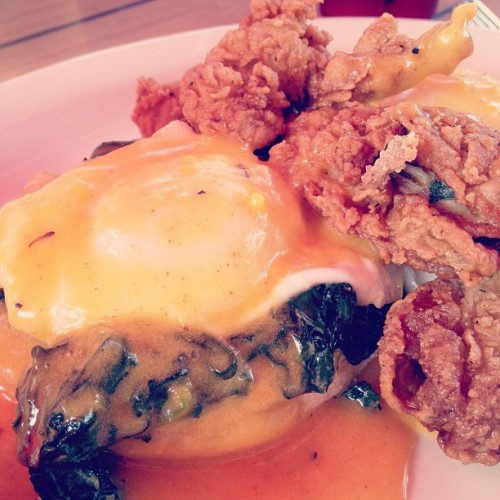 I couldn’t have asked for a better day.  My oldest friends, newest friends, and family, enjoying yummy food, bloody marys, and sunshine together?  Nothing could have topped that!

And there were even presents!!  Colette brought me a pair of Austin approved shades that I can’t wait to pair with my favorite bikini this summer.  They’ll be a good conversation starter, don’t you think? 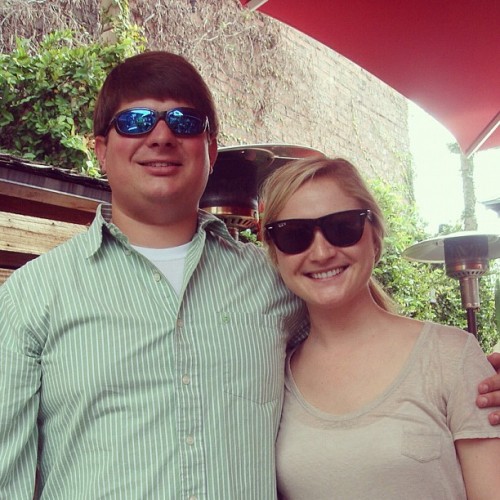 And it dawned on me as I uploaded this picture that brunch was my last Tampa resident meal with Robbie, my all time favorite lunch buddy…  Yikes.

But it wasn’t just an amazing day, it was an amazing weekend filled with as many good memories as we could possibly squeeze into a way-too-short-two-days.  I am beyond blessed to have so many wonderful people in my life and, even though it’s so tough to imagine my day-to-day without them, I know without a doubt that we’ll be seeing each other soon (benefit of moving to a cool city, right?).